A Suggestion From the United Nations

So here's the disclaimer.  I am not a nutritionist nor am I a medical doctor or any other kind of doctor for that matter so any information or advice contained here should not be considered anything except the mental wanderings of someone interested in just about everything and expert in just about nothing.
I really like reading lists of foods that I should eat to reclaim health, vigor, youth, coherence -- you get the picture and you've seen the lists.
Imagine, then, my delight with this list of suggested foods recently released by the United Nations.  It's a list of bugs provided by the United Nations Food and Agriculture Organization.  Bugs are high in protein and at least for now easy to obtain.
Here's the list of best bugs.
1. Beetles

The most commonly eaten beetles are the long-horned, june, dung, and rhinoceros varieties. These are munched by people living in the Amazon basin, parts of Africa, and other heavily forested regions, both tropical and temperate, as diverse species are easily found in trees, fallen logs, and on the forest floor. They are efficient at turning cellulose from trees (indigestible to humans) into digestible fat. Beetles also have more protein than most other insects.
2. Butterflies and Moths
They're very popular in African countries, and are an excellent supplement for children and pregnant women. In Central and South America, fat and fleshy agave worms, which live between the leaves of the agave plant and turn into butterflies, are highly sought after for food and as the famed worm dropped into mescal, a Mexican liquor. 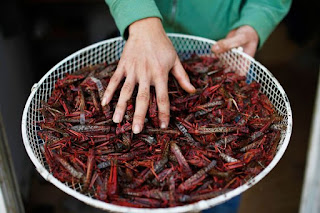 3. Bees and Wasps
We love bees for their honey, but they have more to give. Indigenous people in Asia, Africa, Australia, South America, and Mexico commonly eat these insects when they are in their immature stages. Stingless bees are most commonly munched, with wasps a distant second.
4. Ants
You're probably thinking that it takes a lot of ants to make a meal. True. But they pack a punch: 100 grams of red ant (one of thousands of ant species) provide some 14 grams of protein (more than eggs), nearly 48 grams of calcium, and a nice hit of iron, among other nutrients. All that in less than 100 calories. Plus, they're low in carbs.
5. Grasshoppers, Crickets, and Locusts
Grasshoppers and their ilk are the most consumed type of insect, probably because they're simply all over the place and they're easy to catch. There are a lot of different kinds, and they're a great protein source.
6. Flies and Mosquitoes
Not as popular as some of the others, these insects—including edible termites and, yes, lice—still have a place at some tables. Flies that develop on various types of cheese take on the flavor of their host, and the species from water habitats may taste like duck or fish.
7. Water Boatmen and Backswimmers
Easy to cultivate and harvest, these cosmopolitan little guys deposit eggs on the stems of aquatic plants, in both freshwater and saltwater environments—even in stagnant water. The eggs can be dried and shaken from the plants to make Mexican caviar (tastes like shrimp), or eaten fresh for their fishy flavor.
8. Stinkbugs
If you can get past the funky smell, these insects apparently add an apple flavor to sauces and are a valuable source of iodine. They're also known to have anesthetic and analgesic properties. Who would have thought?
I'm only sharing a list with you.  I haven't tried any of these bugs and I don't expect to.  However, at least two billion people on this planet do regularly eat bugs.
And here's the kicker.  The diets of a good percentage of those two billion are as healthy or healthier than our 'civilized' Western diets of chemicals forced to look like food.
Just some food for thought.
Posted by MaryWalkerBaron at 8:03 AM No comments: