And having a good time living it!

Also learning that when life hands out pancreatic cancer, make sure your hat and boa match.
Posted by MaryWalkerBaron at 1:21 PM No comments:

Inside The Basset Brain

"At last I have achieved my goal.  I am invisible.  No one can see me."

We all need our privacy and Basset Hounds are no exception.  They must have a private place for Basset thinking and Basset dreaming and, yes, Basset plotting.
If it weren't for the leash hanging out from under the sheet, this Basset would, indeed, have been almost completely invisible.
Success, however, is always in the details. 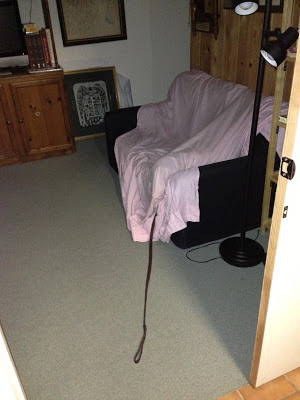 Posted by MaryWalkerBaron at 8:50 AM No comments:

No Kissing In Florida, Apparently

There is especially no kissing in Florida if the recipient of the kiss happens to be a police officer and even more especially if the officer doesn't want to be kissed.  Especially on the nose.
That's the lesson learned recently by Peggy Hill.  Ms. Hill was arrested after she kissed a police officer on the nose against his will.
Officers responded to a call from Ms. Hill's neighbor who accused her of taking part of his fence.  Ms. Hill invited the officers into her yard to show them that said fencing of which she was accused of pilfering was nothing more than a bunch of loose boards laying against her side of the fence.  The situation was complicated by the fact that the neighbor had previously accused poor old Peggy of stealing some of his livestock.
While one officer was trying to sort out all of these accusations, Ms. Hill planted an uninvited kiss on his nose.  She was promptly arrested for battery of an officer.  While getting into the squad car, she fell and hit her head.  She was taken to the hospital where she apparently kissed no one.
Now in jail hoping someone will fork over the $5,000 bond, Ms. Hill has confessed to what was doubtless obvious from the get go.  She had three or four glass of wine before the officers arrived to investigate the allegedly stolen pieces of fence.
She went on to explain that out of nowhere the idea to kiss the officer on the nose just popped into her head.
I gotta wonder how all of this would have played out if she had only asked the officer first.  I mean, how could he have refused a kiss on the nose from someone so supportive of spontaneity?
That's Florida for you, I guess.  No fun.  Just heat and humidity.
Posted by MaryWalkerBaron at 3:46 PM No comments: