The Stop Must Start Somewhere

We are a violent society.  This isn't news.  We don't need mass shootings to remind us that we are violent.  Our language is violent.  Our entertainment is violent.  Our lives are violent.  I've been giving this situation a lot of thought lately and decided that I must start somewhere.  Here is the somewhere.  I will be writing about domestic violence on a regular basis.  I don't that that at this point it much matters where we focus our attention as long as the focus is on decreasing the violence in our society.
I have chosen the following organizations as resources for my writings:
The Joyful Heart Foundation - http://joyfulheartfoundation.org
NoMore - http://nomore.org
And to get us started, here's some important information.  We've got to start someplace.  I'm starting here.

If you or someone you know has experienced sexual assault or domestic violence you can call to speak to a counselor or be referred to local services:

Let's All Be Gay For A Day

I am shocked by the events in Orlando, Florida.  This is unspeakable.  This is unacceptable.  This is not surprising.  We are becoming an increasingly violent society.  Our violence is fueled and even encouraged by political diatribe.  The NRA holds unimaginable power.  Those among us so gentle they help bugs cross sidewalks and those among us not quite that gentle but nevertheless trying to be that gentle understand that no one except possibly our armed forces ever needs an assault weapon.  On social media we cry for an end to violence.  We condemn human slaughter.  Our voices seem lost in the winds of violence. 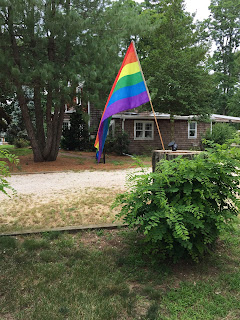 And so we despair.  We hope for a return to civility.  We hope for peace.  However, hope is not a plan.  We do have voices and in the political world our voices can be heard.  Our voices matter.  Each and every one of us is represented on the local level and on the national level by someone elected to office.  Those elected folks care about votes.  We can let them know we've had enough.  Keep writing.  Keep calling.  Even if the responses we receive are scripted and seemingly meaningless, keep on the pressure.  I further believe that we must create or reclaim and certainly nurture our own gentleness -- our own acceptance.  What if for one day everyone flew a rainbow flag?  I don't have any answers right now.  I may never have answers for this type of horror.  However, I did not want to be silent.  I, too, have a voice.  May my voice always speak kindness and peace.  And may my actions reflect and embody my voice.
Posted by MaryWalkerBaron at 12:50 PM No comments:


When I go to my synagogue for services, I always sit in the same place: left side of the pulpit, second row, first seat.  One Shabbat morning, I sat down and found that the legs of the chair in my usual spot were uneven, and the chair moved back and forth as I shifted my weight.  It was quite uncomfortable, but it was my place and I sat in it.  I’m not the only one who does this.  Many people have “their seats” in their house of worship, and if they find someone else sitting in their place, they can get pretty upset.

This week’s Torah portion, Bamidbar, (Number 1:1 – 4:20) begins with a census of the Israelites.  The second thing that God requires of the Israelites is that they find their place. God tells Moses where each tribe shall place their encampment around the Tabernacle, and when they move, they will march in the same order so that when they come to their next stop, they are in place to encamp in the same order once again.

In the Etz Chaim commentary to the Torah, Rabbi Harold Kushner notes that “the details of tribal encampments are a way of emphasizing the need for order and organization in achieving a spiritual life.” The Israelites, not long away from the chaos of slavery and the exodus, are finally given their own place.  Maybe our own needs are not so different from theirs.

Posted by Leslie at 1:32 PM No comments:

Not Just Another Hole In The Ground 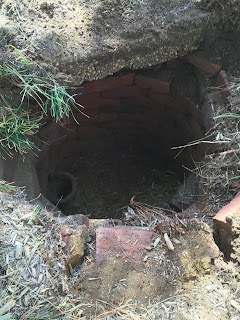 My home was built in the early 1800s about the time Abraham Lincoln was born.  The house was once the main residence on a 400+ acre farm.  It reflects farmhouse architecture.  There is nothing fancy about it.  It was built simply to withstand all types of weather.  The 400+ acres are gone and the house sits on only one acre of land.  It holds many stories and surprises all for me still in the discovery stage.
Not too long ago I noticed that a small area in my front yard covered with pavers appeared to be sinking.
Naturally I had to find out the source of the sink.
Here it is.  In my front yard was a well at one time open and bricked in.  I think at some point the folks got tired of lowering a bucket and sunk a pipe down into the water and doubtless used a hand pump to pull up the water.  They then filled up most of the well with dirt.  You can see the pipe on the left side of the well.
I would loved to have somehow preserved the bricked in well.  It was and remains beautiful.  However, reality won over my desire to keep the well available and I filled it with dirt.  I still know where it is.  The pavers are back in place and I've put flower pots on them.  The well, bricks and all, remain safely under dirt.
Life and front yards often offer amazing surprises.
Posted by MaryWalkerBaron at 2:04 PM No comments:


This week’s Torah portion, Bechukotai (Lev. 26:3 – 27:34) is the final portion in the book of Leviticus.  The bulk of the portion consists of a list of blessings which will come if the people follow God’s laws, and a list of curses which will come if the people disregard God’s laws.  Notwithstanding the severity of the curses, at the end of the passage, we receive the reassurance that God will not reject or destroy Israel, because of the covenant (Lev. 26:43-44).
Rabbi Jonathan Sacks, in an essay on this Torah portion, writes that the only other nation in the world besides ancient Israel which sees its fate in terms of covenant is the United States of America.  He quotes John Schaar’s book Legitimacy and the Modern State, describing the faith of Abraham Lincoln:

We are a nation formed by a covenant, by dedication to a set of principles and by an exchange of promises to uphold and advance certain commitments among ourselves and throughout the world.  Those principles and commitments are the core of American identity, the soul of the body politic.  They make the American nation unique, and uniquely valuable, among and to the other nations. But the other side of the conception contains a warning very like the warnings spoken by the prophets to Israel: If we fail in our promises to each other, and lose the principles of the covenant, then we lose everything, for they are we.

This coming week will bring the last of the primary elections for president of the United States, an election in which the principles of the American covenant are in peril.  I urge everyone in those states holding elections on Tuesday to vote, and until the November elections, to work to keep American principles and promises alive and well.