This week's Torah portion, Chukkat, (Num. 19:1-22:1) begins with the laws of the red heifer, continuing to recount the events of the first two years of the Israelites in the wilderness.  Then, as chapter 19 ends and chapter 20 begins, we are projected thirty eight years into the future as we learn of the death of Miriam, Moses striking the rock and God's decree that because of Moses' lack of faith, he would not be permitted to lead the people into the Land, the death of Aaron and the perpetuation of the high priesthood through his son Eleazar. The final chapter of the parshah concerns further wanderings of the people, and skirmishes with the kings Sihon and Og.

After the laws concerning the red heifer, the Torah has nothing at all to say about the thirty eight years before the death of Miriam.  Of course we know that after the incident of the spies, the fear and lack of faith that the Israelites showed caused God to decree that they would not enter the land until the last of the generation who had been slaves in Egypt had died.  They were going to start afresh with the new generation, born in the wilderness.  It is as if the Torah, which had lovingly described so many details of the lives of the Israelites, now loses interest in anything they do until the new generation is ready to take over.  It is a time of preparation and strengthening for the time to come when God's promise will be fulfilled.

There are times in history when nothing seems to change much and there isn't much remarkable going on.  Generally, these times precede momentous occasions of motion and upheaval.  The former slaves ended their days in freedom.  The new generation prepared for the occupation of the Promised Land to come, knowing that a greater burden would be upon them without the leadership of Moses.  There are times in the lives of nations and in individuals when nothing may seem to be going on, but things are brewing under the surface.

Posted by Leslie at 2:17 PM No comments: Posted by MaryWalkerBaron at 11:40 AM No comments:

An Adjustment AND Torah Thoughts on Korach

This week's Torah portion is Korach (Num.16:1-18:32).  It describes a difficult time for the Israelites in the wilderness.  In the previous two Torah portions, the children of Israel have been punished for complaining about the manna, and wishing for the food they had eaten in Egypt, and demoralized by the report of the scouts, that the land that God had promised them was inhabited by people too strong to overcome.  Now, Korach incites a rebellion against the leadership of Moses and Aaron.  Moses challenges the rebels to a standoff, to let God choose the leaders of Israel. God causes Korach and his followers to be swallowed up by the earth, and the earth closes over them.

This is too much for the children of Israel.  They now begin to fear the Mishkan, the same Tabernacle that, not so long ago, they eagerly gave their possessions to build.  They cry out, "Everyone who so much as ventures near the Lord's Tabernacle must die!  Alas, we are doomed to perish!" (Num. 17:28) So God instructs Aaron to tell the people that henceforth only the priests and Levites will bear the guilt of any encroachment upon the sanctuary.

The Israelites in the wilderness experienced God in ways that we do not today. God tries to assuage their fears of the sanctuary by putting the burden on the priests.  However, we know that, even now, religion has the potential to frighten people away when all they can see is punishment and retribution.  Now, it is up to us, not God, to remove that burden of fear.
Posted by Leslie at 5:54 PM No comments: 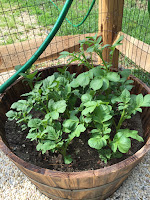 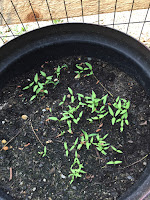 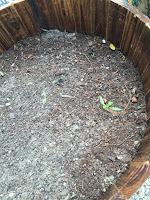 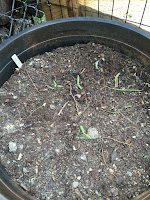 Grape Tomatoes
Posted by MaryWalkerBaron at 11:39 AM No comments:

So Far So Good. 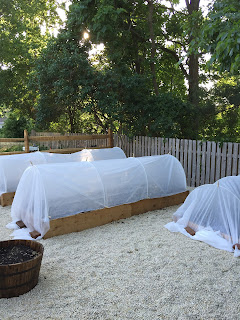 We need to make one more raised bed and perhaps buy a couple more half barrels or make a couple more containers out of discarded somethings or others.  On Saturday we planted cantaloupe, grape tomato, zucchini, okra, eggplant, sweet pepper, beet, carrot, more collards, and cucumber.  Plants are coming up in the first bed.  It rained during the night and, yes, the covers did let moisture in or at least the soil got wet somehow.
Next chore is to figure out some sort of composting system.
So far so good.
Posted by MaryWalkerBaron at 6:54 AM No comments: