At least, he seemed presidential ... 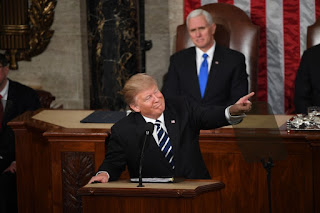 Ten things you can say about Trump’s Feb. 28 address to Congress:
1.    He looked presidential, with his suit coat buttoned and with a nice blue-and-white striped necktie that didn’t hang halfway to his knees.
2.    He actually sounded presidential, speaking in a pleasant, conversational tone  instead of his usual ranting and raving.
3.    He didn’t mention “carnage” or “tombstones”.
4.    He didn’t rail against the media, not even once.
5.    He didn’t sound as if he were teetering on the brink of insanity.
6.    He stuck to what he read on the teleprompter, except for one moment when he backed away from the podium to honor a slain Navy Seal.
7.    He trotted out many of the falsehoods that have been a Trump trademark. He touted a $1 trillion infrastructure program, but never mentioned deficits.
8.    He still needs a presidential speech writer. Someone keeps slipping things like  “radical Islamic terrorism” into his speeches. BAD.
9.    He had one truly extraordinary moment, his tribute to Navy SEAL Ryan Owens.
10.  However, by keeping the standing applause going and going while the grieving widow, Carryn Owens, stood with tears streaming down her face, he made the tribute seem more like an exploitation. Way to go, Mr. President.
Posted by Tom Walker at 2:28 PM No comments: