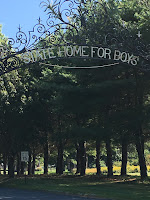 The New Jersey State Home For Boys opened in 1867 as a home for troubled youth. Its purpose evolved into a training school for boys and eventually into a prison for boys. It became know simply as 'Jamesburg'. Soon, due in part to public outcry, it will close its doors for good. Why the public outcry?  The Home or the School or the Prison apparently did little that was helpful either for its residents or for the community. Just before he left office New Jersey governor Chris Christie announced the reform of New Jersey's juvenile justice system with a $162 million bond to finance the closure of this Civil War-era youth prison. Two smaller state of the art juvenile rehabilitation centers were to be built — one in Ewing, Mercer County, the other in Winslow Township, Camden County. The facilities are supposed to house between 40 and 72 youth offenders. Christie’s plan to close the home, called the failed youth prison, was hailed by Ryan P. Haygood, president and CEO of the New Jersey Institute for Social Justice, as being one of the most significant youth justice reforms in 150 years. The State Of New Jersey tells us that the Jamesburg facility is the state's largest, housing about 200 male teenagers.  It is a secure facility with a state of the art perimeter fence and 24-hour armed, roving patrol.  The average age of the residents is between 16 and 18 years.  Once in awhile public opinion sways politicians to do the right thing.  This, apparently, was one of those times.


Posted by MaryWalkerBaron at 12:41 PM No comments: