So, the food journal is still happening, and I still fill it with as much passive-aggressive disdain as I can muster. This morning's post-breakfast entry reads, "4/24/12, 7:10am - Finished preparing my snacks for later. Appears that somebody got into my trail mix and picked out all the donuts and leftover pizza, AGAIN." - Michael Walker
Posted by Michael Walker's FaceBook Friend - With His Permission at 9:26 AM No comments:

Hoboken Has It Right

Since I feel strongly about the normalization of mental illness, I couldn't help but give a shout out to the city of Hoboken for this sign and its clear statement that mental illness is while not always fun okay in Hoboken. 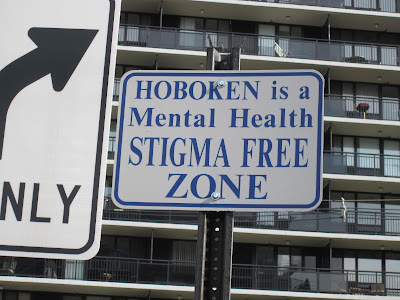 Posted by MaryWalkerBaron at 6:27 AM No comments:

It's a rain whipping through the trees to match the blowing wind kind of day and on the Q headed to Brooklyn I had a chance to look through the drizzle dripped window to the Brooklyn Bridge.  I will never forget that lucky day almost twenty years ago when I bought that bridge.  It's mine all mine.  And I'm not selling it no matter what.  So there!
Posted by MaryWalkerBaron at 7:54 PM No comments:

The Tenement Museum on the lower east side of Manhattan takes us back through history to the late 1800s when large families lived in small apartments, four two a floor, with at the turn of the century the vast improvement from three shared outhouses in the back to two shared toilets on each floor.  At about that same time the fireplaces in each apartment were closed up because too many buildings burned down.  And at about that same time codes began to form to keep sweat shops from operating in the homes.  As many residents of each apartment could work long hours in their own homes producing garments.  However, if a non resident worked out of the apartment the place was declared a sweat ship and had to meet certain requirements none of which prevented in 1911 the fire at the Triangle Shirt Waist factory.  At any rate, the Tenement Museum is a good place to walk through history.
Posted by MaryWalkerBaron at 7:47 PM No comments:

The Hardest Part of Change

The hardest part of change is anticipating the moment of change.  We are thrown off balance.  We are neither where we were nor where we will be.  These terrifying off balance moments also hold the greatest opportunities for renewal.
Our job is to not be afraid.
Posted by MaryWalkerBaron at 10:14 PM No comments:

Sometimes Being A Hero Is Easy

There's an alley beside the building where I work.  It goes past a school yard.  It's the quickest way to get from one site of the agency to another.  We all go down that alley several times a week.  Today as I was driving down the alley I saw a basket ball lying off to the side.  I could easily have driven around it except for the children standing on the playground side of the chain link fence staring at the ball.  So near and yet impossible to reach.  I pulled up beside the ball, got out of the old Jeep, and tossed the ball into the play ground.  The cheer was one of the most amazing sounds I've ever heard.  And above the cheering I heard a little girl say, "Thank you.  You are a very nice lady."
And that's the story of how I became a hero at least for today.
Posted by MaryWalkerBaron at 9:56 PM No comments:

"When a person is born we rejoice, and when they are married we jubilate, but when they died we pretend nothing has happened."  --  Margaret Mead

To learn more about the fictional Margaret Mead read But This Is Different.
Posted by MaryWalkerBaron at 8:40 PM No comments:

The play is written by Bryan Harnetiaux and deals with end of life issues in a very direct way.  Visit the Fremont Theatre's web site for more information:

James and Lissa Reynolds restored the theater with the vision of bring art to South Pasadena and creating a community of artists and those who appreciate art.  This is their fifteenth anniversary season.  Celebrate with them by attending one of the performances in the historic theatre.
Posted by MaryWalkerBaron at 7:55 PM No comments:

Just Getting My Mail, That's All

For years I've had a Post Office box for purposes of my clinical social work license and other stuff. I pick up my mail every other week or so generally on a Sunday afternoon. Old post offices are pretty neat places with their high ceilings and study bricks for walls. I generally sort through my mail and jettison the junk mail (which is mostly what I receive both at home and at the post office) in the recycling bin right then and there. I didn't do that today. A woman was singing loudly and with great enthusiasm to the recycling bin and I didn't want to disturb her. After all, I have my own recycling container and it was looking pretty good today.
Posted by MaryWalkerBaron at 1:12 PM No comments:

Back In The Saddle Again

Posted by MaryWalkerBaron at 9:21 PM No comments:

On a fairly regular basis a new search for either the remains of Amelia Earhart or the remains of her Lockheed Electra is launched with great expectation and excitement. This will surely be the search that unravels the mystery of her disappearance! And what a mystery it is. This summer marks the 75th anniversary of a mystery that continues to fascinate, confound, and seduce much of this country and, indeed, much of the developed world.
On July 2, 1937 Amelia Earhart and her navigator Fred Noonan took off from Lae, New Guinea. They were never seen again. No real evidence of them or of her Lockheed Electra 10E has yet been found. While other famous people have disappeared without a trace, no disappearance seems to have had, or continues to have, such a grip on our spirits.
Now the grip has tightened once again.
A photograph taken several months after her disappearance contains the image of what may possibly be the landing gear of the Lockheed Electra off a remote South Pacific island. In July a team will go to that island hoping to not only find the remains of the plane but also the remains of Earhart and Noonan.
Such is the grip of Amelia's mystery, and so compelling is this new possibility, that even Secretary of State Hillary Rodham Clinton and Transportation Secretary Ray LaHood give the upcoming search their encouragement. Secretary Clinton went on to say that Amelia "gave people hope and she inspired them to dream bigger and bolder."
I have long been among those fascinated by the personality of Amelia Earhart and her disappearance. So consuming was my own fascination that I explored the "what-ifs" of the disappearance by writing a novel called But This Is Different. In my novel Amelia's disappearance was carefully planned and skillfully orchestrated by Amelia and her equally famous lover, Margaret Mead. Two women in love, they simply wanted to disappear and spend their lives together. History tells us that their story didn't work out quite as planned. History tells us that Amelia Earhart disappeared in July 1937, and that Margaret Mead -- always in the public eye -- died in a New York hospital on November 15, 1978.
History does not tell us that Amelia spent 40 years waiting to keep the promise she had made to Margaret: "I will come if you need me." History doesn't tell us that many of Mead's visits to the South Pacific were constructed around brief and secret visits to that very small, almost invisible island on which Amelia lived and waited. And history certainly doesn't tell us that most of the wreckage of what was once the Lockheed Electra was hidden and eventually morphed into a boat looking like nothing ever designed for water. But This Is Different fills in those historical gaps and answers the fictional mandate of "what if?"
Recently, readers of But This Is Different have been asking me if I'm worried that the wreckage and remains will be found. "What will you do?" they ask. "What will happen to But This Is Different?" they worry.
When I wrote But This Is Different, I was not unaware of the possibility that wreckage and remains might someday be discovered. Did I worry about that while creating my novel? No. Such concerns would only have impeded the writing. What I did try to do, though, was create a story capable of folding into history without disturbing it. Isn't that the challenge of all historical fiction? History has happened. Weaving another possibility into it cannot change what was. It can, however, enlighten and explain.
If the object in the now-enhanced 1937 photograph proves to be part of Amelia's plane, it won't intrude on the narrative of But This Is Different. It will only indicate that not all the debris from the Lockheed was collected by the islanders at the instruction of their Pilipan (Mother Chief) Margaret Mead. And if the remains prove to be those of Earhart and Noonan, my story won't change, either. It will just mean that a woman capable of feeling passion and pain sufficient to stop the birds from singing and deep enough to cause the oceans to weep died before she could fulfill her dream of living the love that, at the time of her disappearance, had no name. And the story contained in But This Is Different will become, as it possibly already is, the dream narrative of a life imagined by two women who continue to captivate and guide. Such a discovery might also mean that the icon of the American Museum of Natural History, Margaret Mead, lived the rest of her life cherishing the memory of such love and such passion and such "we-almost-made-it" possibility.
The story of But This Is Different will stand the test of discovery. And I stand by my story.

Posted by MaryWalkerBaron at 8:43 PM No comments:

Supplies: Stack of Nutella & banana paninis still growing; too many comics, dvd's, and video games to list with any degree of accuracy
Crew: Captain-rested and ready; Co-Captain-AWOL; Navigator-just read "paninis" as "penis" and is laughing uncontrollably (could be a long day)
Weather: A bit windy and chillier than yesterday, but cleared for travel.
Captain's Log: Crew is still on the floor, but otherwise seems competent and in clearly demonstrated good spirits. While our route is flexible, our destination is Tucson, AZ. Navigator has a notoriously small bladder, so I expect to make frequent stops.

Posted by Michael Walker's FaceBook Friend - With His Permission at 2:27 PM No comments: