This time, the Fool Killer isn't walking away


People have been digging up their favorite Tom Wolfe quotes since his death May 14. Here’s mine, from The Right Stuff:
“It was the kind of crowd that would have made the Fool Killer lower his club and shake his head and walk away, frustrated by the magnitude of the opportunity.”
Wolfe was writing about the media mob on the lawn of John Glenn’s house on Feb. 20, 1962, waiting for Glenn to be either hurled into space or explode in a giant fireball on the Cape Canaveral launching pad.
Now, it seems the situation has been reversed. The “Fool Killers” are the media. And they have some rich opportunities for their shillelaghs. Just to name a few:
--  Michael Flynn.
-- Paul Manafort.
-- Michael Cohen.
-- Rudy Giuliani.
-- Scott Pruitt.
-- Donald Trump Jr.
-- Jared Kushner.
-- And Kelly Sadler, a nobody Trump staffer who became instantly famous for dismissing John McCain: “he’s dying anyway.” (As a hospice patient myself, I found Sadler’s remark particularly galling.)
-- And, of course, the Commander in Chief Fool, who makes all this happen, like a mad wizard flinging poisonous flowers from his fingertips.
Special counsel Robert Mueller and his team are doing an excellent job of chopping through the underbrush in search of fools that need cudgeling. Let’s hope they’re allowed to continue their work unimpeded by the Chief Fool.
And let’s also hope the Fool Killer doesn’t become overwhelmed by his opportunities, as Wolfe says he did back in the beginning of the Space Age.
There’s much more at stake now. Our democracy, for example.
Posted by Tom Walker at 5:44 PM 2 comments:

Watching Life Through My Window 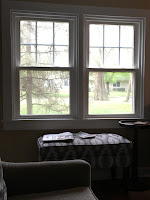 During my childhood I never lived in a town.  We never had a street address. While our house did have windows what we saw through them was nature in all its glories.  We never saw people except on the rare occasions when we had visitors.  I'm an adult now and I work from home.  The isolation or seclusion feels familiar and comfortable. There's a big difference, though, between the isolation of my youth and my current because I work from home isolation.  We live on a street and our living room and dining room windows look out on that street.  Just about every morning I drink my coffee on the living room couch looking at our street.  Life pretty much progresses though that window.  I've seen deer in our front yard.  I've watched blizzards drop mountains of snow.  Almost every morning people walk their dogs.  And for the last four years I've watched the children of our next door neighbors grow and gain independence.  When we first moved here only the little boy went to school.  Every morning his mother walked him to the school bus which picked him up on a nearby corner.  His little sister got pushed in a stroller.  Sometimes they were all bundled up and other times they wore less constricting clothing.  And suddenly before I knew it both children were getting on the school bus still walked to the corner by their mother.  Lately the mother has been walking several yards behind the siblings.  Clearly there's an understanding of an increased need for independence.  Once when the sister did not go to school the mother only walked part way to the bus.  Then all of a sudden she started running toward it, shouting and waving her arms.  The little boy, possibly, had asked or informed that he would get off the bus by himself.  He then became confused and wandered into the middle of the street.  Luckily our street isn't busy and no passing cars came even close to being a danger.  However, when she got to him and hustled him out of the street and onto the sidewalk they hugged and comforted each other and finally, still embracing, walked back down the street to their home. I watch dogs on leashes grow from puppy to middle age, from out of control to greater obedience.  I think I'm lucky for a work schedule that allows me time to watch through my window life progress and pass. And maybe someday I'll find out the names of the family living next door to me.
Posted by MaryWalkerBaron at 2:43 PM No comments: 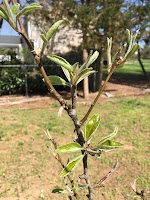 About a year ago my grandson and I planted an apple tree and a pear tree.  You may recall reading about that adventure on this blog.  While the apple tree thrived, the pear tree didn't do so well.  In fact, I was pretty sure it had died or if it hadn't died by fall it would surely not survive the winter.  My grandson was upset and wanted to keep checking on the pear tree just in case.  He's a bit of a worrier that way but no more so than I.  We were both pretty concerned about the little baby pear tree.  This winter was particularly long and incredibly cold.  And then spring crept in and the pear tree has leaves and possibly even some flowers.  There are a couple of dead branches but the tree itself is obviously alive.  I was never tempted to declare it dead and I certainly never considered pulling it out of the ground.  Sometimes it just seems to take some of us a little longer to get started.
Posted by MaryWalkerBaron at 12:42 PM No comments: