Growing Old Is Not For Sissies 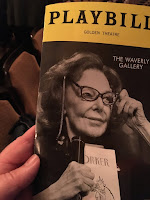 I recently attended a matinee performance of The Waverly Gallery in which Elaine May gives a hauntingly brilliant performance of a woman descending into dementia. Elaine May is 86 years old and may very likely wonder how long she will be able to remember her lines.  Whether we are young or old dementia is not something for which we yearn.
The Alzheimer's Organization speculates that an estimated 5.7 million Americans of all ages in 2018 live with dementia. One in ten people over the age of 65 years suffers from dementia. In this country, today, someone develops dementia every 65 seconds.
The American Journal of Medicine defines dementia as any decline in cognition significant enough to interfere with independent, daily function. It goes on to say that dementia is characterized as a syndrome rather than as one particular disease.  However, the late Oliver Sacks once observed that when we are young we forget our keys and when we find them say to ourselves, "That was careless of me to forget my keys." However, when we are older, Sacks observes, when we forget our keys we immediately assume we are descending into dementia instead of simply reminding ourselves that all we did was forget our keys. We live under the shadow of possible dementia. It seems to relentlessly hover over us.
It's been over 50 years since Elaine May was last on Broadway.
Ben Brantley, in his review for the New York Times, warns us that Elaine May as Gladys Green will likely break out hearts. "An octogenarian New Yorker, former lawyer and perpetual hostess for whom schmoozing and kibitzing have always been as essential as breathing, Gladys operates on the principle that if she can just continue to talk, she can surely power through the thickening fog of her old age. That she has clearly already lost this battle makes her no less valiant."  What we learn from May's Gladys Green is the essential nature of living in and delighting in this very moment. Both Gladys and we know that it might very well be the only one we have.

Posted by MaryWalkerBaron at 10:21 AM No comments:

We Honor And Thank Them All

We honor and thank even those who never returned. Today is Veterans' Day set aside to  acknowledge all United States military veterans. The day was originally known as Armistice Day to mark the end of major hostilities of World War I, the war to end all wars. Those hostilities formally ended at the 11th hour of the 11th day of the 11th month in 1918. The name was changed from Armistice day to Veterans Day in 1954 presumably, I'm thinking, because the war to end all wars didn't. Memorial Day, observed in May, honors those who died in military service.

My uncle Jerry Walker, pictured here with his father A. G. Walker, never returned from World War II. I honor his memory every Memorial Day and I'm sure no living Veteran would object to my honoring his memory today either. I never met my uncle Jerry but I understand from family lore he was quite a character.  "A Walker through and through," my Aunt Cassie often said.
My grandfather, Jerry's father, worked his way up through law enforcement until he finally became warden of the Arizona State prison in which I was born. While Papa was a deputy sheriff he got complaints from cattlemen and many others that kids were ditching school and swimming in the water tanks.  Papa decided to do something about this irritating situation and started checking out water tanks in the middle of the school day. He finally found the right water tank. It was full of kids splashing and laughing. He turned on his siren and his flashing lights and watched as children jumped from the tank, gathered their clothes and shoes and ran in all directions into the desert. Satisfied that he had sufficiently frightened the kids to keep them from ditching school and swimming in the water tanks again, he started driving away. Just ahead of him walked a naked boy with his clothes and shoes thrown over his shoulder. Papa honked and the boy turned around to stare into his father's furious face. Papa loved all of his children and grandchildren but Jerry held a special place in his heart.
Jerry was just 19 years old when he died not from wounds sustained in battle but from an accident in the South Pacific. My uncle Jerry was a belly gunner on a Flying Fortress--a particularly grotesque war machine. Returning from battle the crew was unloading weapons and ammo. Someone dropped a gun. As it hit the pavement it fired and the bullet hit young Jerry Walker in the forehead.
Eventually Jerry's body was returned. My grandfather wanted to make sure he was about to bury his son and so, against all advice, he opened the casket. He saw the bullet hole in the middle of his son's forehead and knew his son was dead. Jerry is buried next to what would become the grave of his father.
Papa never recovered from Jerry's death. I seriously doubt if any parent ever recovers from the death of a child. War is brutal and wastes so many precious lives. May the day come speedily when we all live in peace.
Posted by MaryWalkerBaron at 3:06 PM No comments: 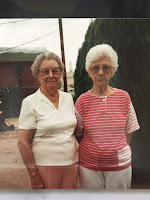 She was named for her grandmother, Cassandra. We called her Cassie. She's on the left in this photograph. My Aunt Thelma is on the right. She also was a remarkable woman. Cassie was the first child born to my paternal grandparents, A. G. and Jesse. She was the strongest and the most unflappable person I have ever known. When she was 8 years old she prepared the bodies of her mother and newborn sister for burial. They were on the kitchen table and there was no one else to do this dreaded task and so my aunt took over. The baby never received a name. Years later Cassie buried her own infant daughter. Unlike her sister, Cassie's daughter had a name. It was Wilma.  I believe my aunt and I had a very special bond but then all of her many nieces and nephews and grandchildren and great grandchildren doubtless thought the same thing. Every Thanksgiving Cassie would tell me that all she wanted to do was make herself a sandwich, go out into the desert, sit on a rock and eat it. Of course she never was able to do that because she spent most Thanksgivings in the kitchen cooking for the multitudes of family and and friends gathered to spend time with her. She loved, though, to go out into the desert, build a fire, and cook over it either in a cast iron dutch oven or on the griddle made of boiler plate steel. We did that often. After one quite ordinary meal in the desert cooked over the campfire I decided to clean the still hot griddle. I picked up a large piece of material. The moment it touched the griddle it burst into flames. I stood transfixed by the flaming mass in my hands. After s few seconds Cassie's calm voice suggested that I might want to let go of the fire before I burned myself. So I did. I watched the burning bundle drop to the ground. I then stomped out the flames into the sand. Cassie looked up and said to me, "There must have been some polyester in that." There was no fussing over what might have happened because what might have happened didn't happen. There was no fussing over me, either, because anyone could clearly see that I was unharmed. We packed up the cook gear, made sure the camp fire was out and went home. Often we don't exactly know the source of our strength. I know mine is inherited.
Posted by MaryWalkerBaron at 4:19 PM No comments: