A time when no drone is safe

s if we didn’t have enough problems, what with a president who is blowing apart climate treaties, NATO, and our country, now we are the victims of a home invasion.
These home invaders didn’t come armed with guns and wearing ski masks, hoodies and gloves. They wore yellow and black body suits, wings and stingers.
Honey bees. 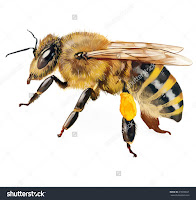 Our neighbor first spotted them, and called to let me know that we might have a bee problem. I went out in our backyard to check, and yes indeed, we did have a bee invasion, buzzing in and out of a hole beneath one of the mission tiles on our roof.
Now I love honey, and I love bees – in the abstract. I’ve read some great books about bees, like The Queen Must Die: And Other Affairs of Bees and Men by William Longgood and Pamela Johnson.
That dreadful autumn day in which the female worker bees gang up and drive the lazy, freeloading male drones out of the hive is a cautionary tale for any man. It’s why I’m constantly giving back rubs and opening jars for my wife. I don’t want to end up out on the doorstep, all wing-tattered and mangled, when “The Massacre of the Drones” comes, as it surely must.
But I digress. Our problem was a real bee problem, not a literary one. And for this problem, there was only one man for the job. His name, unfortunately, isn’t James Bond. It’s Robert Probst.
Our pest control guy.

obert has been keeping our home safe from spiders, cockroaches and scorpions for many years. He used to work for a big exterminating company, but then he started his own business, Premier Pest Control. He’s a big, friendly guy with what I assume is a New Jersey accent; he’s always saying, “youse” this and that. His contract also covers protection from pack rats, which has been a big problem at our house at times, and bee removal, which until now was never a problem.
But that was no problem for Robert. On Memorial Day, when most of the country was honoring our war dead by grilling hamburgers and hotdogs, Robert drove across Tucson to our house. Then he struggled into his bee-fighting suit, climbed up his ladder and did what had to be done to make our house safe from apis (bee) invaders. Superhero stuff, to be sure.
I watched from a distance until he sprayed insecticide into the hive, setting off an explosion of bees frantically attacking the man who was killing their queen and their world. Then I decided it was time to retreat into the safety of our screened back porch.
Robert used a couple different kinds of bee-killers that sound like they were invented by a diabolical genius. One of them sent a cloud of blue dust into the hive that left worker bees coated with insecticide that they tracked into the center of the hive, killing all the bees that were in there.
The bees that escaped to the outside were unable to fly because of the dust, and they littered the ground under the hive by the hundreds, like fallen “Game of Thrones” warriors.
Sad.

hen he was finished, Robert told me to stay out of the backyard for the next couple of days, and he’d be back on Friday to fill up the hole that had let the bees get into our house. Sounded like a good plan to me.
But I couldn’t wait. On Tuesday, I ventured out in the backyard to see what was going on. On the eaves of our roof where the nest had been, there were no bees buzzing around, just the blackened bodies of the dead bees on the ground. Apparently the live ones had given up on that place.
They weren’t all gone, however. I looked up in one of the big trees in our backyard, and lo! There on a long abandoned honeycomb left behind by some swarm were about fifty or so remnants of the hive, drawn by pheromones, hoping for a miracle that would bring their queen, their honey, and all the rest back to them.
Sort of like the guy who sits around at 12:06 a.m. Eastern time on Wednesday and tweets this message to the world: “Despite the constant negative press covfefe.”
Within six hours, the message had been retweeted more than 127,000 times,” according to The Washington Post, and “liked” more than 162,000 times. That’s one of Trump’s most popular tweets in months, the Post added. “By then it had become a massive Internet joke.”
I’m not sure even Robert the pest control guy could fix this problem.

A classic situation for a slingshot

"This is a classic situation for a catapult."


By Tom Walker
witsendmagazine
n 2011, my sister, Mary Walker Baron, wrote an article for her blog, witsendmagazine.com, about that quote above. In case you may have somehow forgotten, it’s a line delivered by Melvyn Douglas, as Col. Claude Brackenbury, in the movie, “Advance To The Rear.”
At various inappropriate times, the somewhat addled colonel announces, “This is a classic situation for a catapult.”
Well, Mary gave you an excuse for not remembering it: “The movie was forgettable,” she wrote, “something about the Civil War.”
And, obviously, at a time when bullets and cannon balls were doing an excellent job of sending Union and Confederate soldiers into their graves, the Civil War wouldn’t seem to be a classic situation for a catapult. Sorry, Colonel Brackenbury.

rowing up poor on an Arizona desert ranch, Mary and I never had much of anything in the way of Tonka trucks or baby dolls to play with. But when we were kids, our dad made both of us some toys that proved to be a classic situation for our situation.
In fact, it was an early form of catapult: a shepherd’s sling, similar to the one David used to slay Goliath. Absolutely simple in design, our slings consisted of a leather pouch in the middle of two lengths of leather cord. There was a loop at the end of one of the cords that you placed over your thumb, and the other cord was held between the thumb and forefinger.
A small, round stone was placed in the pouch. You then swung the sling in an arc, and at the precise moment, you let go of the sling end of the cord. My faithful friend, Wikipedia, gives this explanation of what happened then: “The sling essentially works by extending the length of a human arm, thus allowing stones to be thrown much farther than they could be by hand.”
Oh yes, it did. As a dedicated slinger, I could hit the wood-plank walls of our corral with deadly, air-wailing stones from a hundred yards away. Finally, my dad asked me to do my slinging in another direction. I was wearing out our corral fences with my rocks.

rchaeologists recently unearthed evidence that the Romans used slingshots 1,900 years ago in their long war against the rebel tribes of Scotland. The Roman slings could send a small lead bullet up to 130 yards at a speed of 100 miles per hour. They had the stopping power of a .44 magnum, the gun that Clint Eastwood made famous in his Dirty Harry movies.
And like Dirty Harry’s .44 magnum, the Roman sling could blow your head clean off. Or maybe scare you to death. The researchers found holes drilled in the lead Roman bullets to make them wail loudly and terrifyingly as they flew through the air.
The war against the Scottish barbarians dragged on for nearly two decades. Eventually, the Romans retreated to a fortified barrier they had built known as Hadrian’s Wall.
Remnants of the Roman wall still stand, a tourist attraction and a monument to the futility of walls as a means of keeping unwanted invaders out. China’s Great Wall didn’t stop the Mongol hoards.
And funny, now we have a president who wants to build a 2,000-mile wall along the Mexican border. It’ll be GREAT! And BEAUTIFUL! And it’ll make some lucky wall builders RICH! Rich, courtesy of the American taxpayers.
But how many people will it keep from entering the United States? NADA!

“President Eisenhower … foresaw a new age of collusion between politicians, defense contractors and those who wear the stars,” Brooks and Beehner write. “It was bad enough during the Cold War, but the dysfunction is even worse now. Consider that of the 63 largest Pentagon programs at the moment, 50 are over budget by $296 billion.”
It isn’t just money that gets wasted, the writers say; it’s lives. In Iraq and Afghanistan, while Americans were being killed and maimed by improvised explosive devises, the Pentagon was spending billions on air superiority fighter jets and anti-ballistic missile lasers.
Meanwhile, our soldiers were wearing uniforms so cheap they tore like tissue paper, and they rode in vehicles so lacking in armor that they tore like tissue paper when the IEDs went off.
An interesting fact from the LA Times article: “The term ‘shoddy’ comes from the flimsy, mass-produced shoes that ‘shod’ our troops during the Civil War.”
But what about catapults? you ask. What about slingshots?
Well, I think my point is that President Trump is trying to build something along the lines of a catapult with his proposed budget that asks for a $54 billion increase in defense spending. That seems to be the point Brooks and Beehner are making, too. As a candidate, Trump promised  to slash the cost of military programs, but he now promises “to lavish the military with whatever it needs.”
So defense contractors will get RICH! RICH! RICH! building aircraft carriers, missile defense systems and other ultra-expensive catapults while more Americans lose their lives and limbs in future (or maybe ongoing) wars.
What we need are good slingshots, otherwise known as investigative reporters and writers like Brooks and Beehner. Trump calls them the enemy, but I call them heroes.