What I Learned From Losing Big Mama

What I Learned From Losing Big Mama
M. Walker Baron

My grandmother died when I was just five.  Her name was Berda Butler Latham but Tom and I called her Big Mama.  Tom and I were not her first grandchildren but we both knew we were her favorite grandchildren.
I never met my maternal grandfather.  He died in the heart of the Great Depression.  My mother was fourteen years old when her father died.  Big Mama lived in a tiny house in Wickenburg.  Every day she walked to the cemetery to visit her husband’s grave.  That was no easy task.  The cemetery in Wickenburg is up a fairly steep hill.  Nevertheless, she made the daily hike to his grave.  About once a year Big Mama got on a bus to visit my aunt and uncle in Santa Ana, California.  She always brought back presents for Tommy and me.  Once present was seashells for us both.
Big Mama collected Indian Head nickels.  I used to sit on her lap, unzip the leather purse in which she kept them and spend hours just sitting there looking at the nickels.
Big Mama knew I liked jello.  She made me jello in Mason jars.  I would sit on her lap eating my jello out of the Mason jar.
When she died I tried to make a deal with God.  If God would give me back Big Mama, I would give God my seashells. Not surprisingly, God did not go for the deal.
Often Big Mama took Tommy and me to an afternoon matinee at the Saguaro Theater but after she listened to The Lone Ranger on her radio.
One film I remember seeing was West Point.  Tom and I liked that movie and for quite some time after we ate lifting our forks in squares.  Big Mama and Tom and I got a kick out of that one.
Someone I didn't know once told me that I was going to be just like my Grandma Latham.  I was thrilled.  I assumed the person meant people would really like me.  The person’s reply was shocking when the person told me I was going to be really fat.
I never thought of Big Mama as being at all overweight.  She was just Big Mama.
A close friend of Big Mama’s (Anna P.) wept when she remembered her.
When Big Mama was in the hospital there were strict rules about who could visit and when.  I wasn’t old enough to visit so my mother held me up to the window and Big Mama and I would visit that way.
Here’s what I learned from losing Big Mama.  Never try to outsmart God.  I can survive just about any loss no matter the size of the loss.
I’m a writer and I learned a lot about living and writing from losing Big Mama.  Loss is part of living and no matter how huge or traumatic the loss is, it is survivable and I can write about loss. 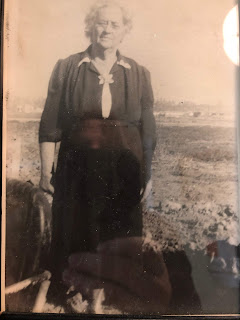